I somehow missed a few weeks of Monochrome Madness but maybe I can get my brain cleared enough to keep up with future challenges now that we’re getting closer to spring. You can check out this week’s whole diverse collection at Leanne Cole’s blog, click here.

This little black-capped chickadee (Parus atricapillus) perched on the weathered wood that was the branch of a long-dead tree right beside me while I set up for an owl shot earlier in the winter. I shot this image against a plain pale grey sky that conveniently disappeared when I exposed the image for the chickadee, allowing the wood and feather textures to easily take center stage.

I missed the Monochrome Madness Challenge this week but since I have this black and white image sitting on my hard drive I thought I would post it now.

This half-submerged stump in one of the outer ponds is a favorite gathering place for the Canada geese and ducks at the bird sanctuary to primp and preen.

Here we are on Tuesday in the Pacific Northwest of North America, so it’s time again for Monochrome Madness over on Leanne Cole’s blog. She has a lot of new participants in the challenge this week, so head on over and check them out!

I’m back to posting images of critters again this week, and this Great Horned Owl (Bubo virginianus) moved into the bird sanctuary back in the fall, presumably from somewhere further north. Most of these guys tend not to migrate, but some of those who live up north will do so. This magnificent creature didn’t seem too bothered by my presence at all, s/he’s glaring at me here, but slept through most of the visitors. S/he’s actually safely tucked away in a very high tree, tho it doesn’t look like it in this image.

Here’s a little info on these large owls.

Great Horned Owls hunt by perching on snags and poles and watching for prey, or by gliding slowly above the ground. From high perches they dive down to the ground with wings folded, before snatching prey. Prey are usually killed instantly when grasped by its large talons. They also hunt by walking on the ground to capture small prey or wading into water to snatch frogs and fish. They have been known to walk into chicken coops to take domestic fowl. Rodents and small rabbits can be swallowed whole while larger prey are carried off and ripped apart at feeding perches or at the nest. Birds are often plucked first, and legs and wing tips discarded. An extremely wide range of prey species (over 250 identified) are captured, but rabbits and hares are its preferred prey. Mammalian prey includes all coexisting rodents, squirrels, mink, skunks, raccoons, armadillos, porcupines, shrews, moles, muskrats, and bats. They may sometimes take small domestic dogs and cats. Bird prey includes all other Owls (except Snowy Owl), grouse, woodpeckers, crows, turkeys, pigeons, Red-tailed Hawks, bitterns, Great Blue Heron, ducks, swans, gulls, etc. Reptiles include snakes, turtles, lizards, and young alligators. Amphibians include frogs, toads, and salamanders. Other foods include fish, large insects, scorpions, centipedes, crayfish, worms, spiders, and road killed animals. A Great Horned Owl is powerful enough to take prey 2 to 3 times heavier than itself.

Nesting season is in January or February when the males and females hoot to each other. When close they bow to each other, with drooped wings. Mutual bill rubbing and preening also occurs. They do not build a nest of their own but utilize the nests of other birds such as the hawk, crow and heron. They may also use squirrel nests, hollows in trees, rocky caves, clumps of witches broom, abandoned buildings, or on artificial platforms.  They are extremely aggressive when defending the nest and will continue to attack until the intruder is killed or driven off. Families remain loosely associated during summer before young disperse in the autumn. Adults tend to remain near their breeding areas year-round while juveniles disperse widely, over 250 km in the autumn. Territories are maintained by the same pair for as many as 8 consecutive years, however, these Owls are solitary in nature, only staying with their mate during the nesting season. Average home ranges in various studies have been shown to be approximately 2.5 square kms.

A long-lived Owl, captive birds have been known to live 29 to 38 years, and wild Owls up to 13 years. Most mortality is related to man – shootings, traps, road kills and electrocutions. The only natural enemies are other Great Horned Owls and, occasionally, Northern Goshawks during disputes over nest sites. Peregrine Falcons have also been observed attacking Great Horned Owls.

Great Horned Owls are found throughout North America from the northern treeline and then in Central and South America. They are resident year-round, however, birds living in the northern part of the species’ range may migrate south.

This is Espada, a lovely black Andalusian mare, channeling a racing Thoroughbred. I love the sense of raw energy in this image.

Hop on over to Leanne Cole’s blog to check out all the submissions for this week’s Monochrome Madness Challenge. The variety of styles is always really interesting!

At the beginning of August I featured the color version of this image, which I’ve included again below, but since it lent itself so well to black and white I decided to submit it to this week’s Monochrome Madness Challenge on Leanne Cole’s blog (click here to visit this week’s eclectic collection of great images).

While visiting the grounds of a small French chateau that was being restored, we found these two swans swimming at one end of a pond, where a a group of very old cedar trees leaned over the water, draping their branches close to the surface and obscuring most of the light. But a few small shafts of sunlight succeeded in penetrating the gloom, spotlighting the swans and reflecting some of the  light onto the tree trunks. I fired off a couple of quick shots before the swans moved out of the light, but I wasn’t optimistic about the results as my camera really struggles with low light situations, and I didn’t have time to set up a tripod even if I’d had one with me. But when I saw the image on my computer I was enchanted, and I found myself wishing I’d spent more time trying for different angles, just to see what might have come out of it. In any case, I love this shot. I love the green glow in the color version; the spotlighting of the swans; the reflected light; the way both swans appear to be checking out their own reflections; the serenity of it… I don’t think I could have designed the scene more perfectly, and I absolutely didn’t manipulate it in post processing, which was minimal — just minor, very basic Lightroom on a RAW image stuff. Well, okay I did pop the green a tiny amount in the color version, but really very little. I can’t decide if I like this one or the color one more. I really like the effect of the green from the moss and foliage which enhances the glow in the color image, and the pop of color of the swan’s bills, yet I think the black and white version works well, too. The emphasis in each feels different to me…possibly more about the swans in the monochrome, and more about the whole scene in the color one? Any opinions? 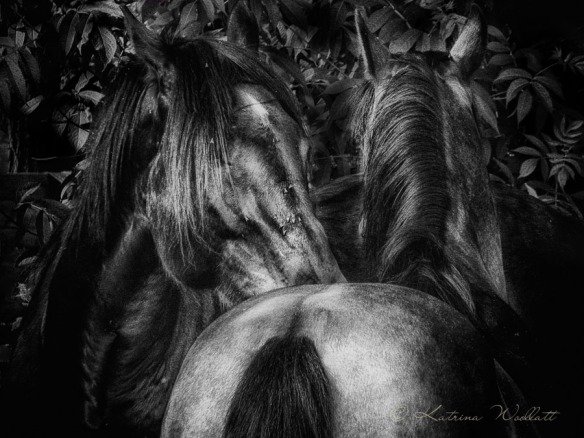 Click here to head on over to Leanne Cole’s blog to check out all of Week 33’s great black and white images.

Two posts today because I missed one yesterday…

It’s time for Monochrome Madness again, and this is my submission for this week. Click here to check out everyone else’s great MMC images on Leanne Cole’s blog.

I was down at White Rock beach a week ago and the water was dead calm, no breeze at all most of the time and altho the sun was shining, everything was very hazy. There were several flocks of migrating surf scoters and Canada geese just offshore and flying around, and a few sailboats further out, not going very far very fast. The strange light made the whole scene very surrealistic.  Everything was desaturated by the haze and the quality of the light, so it was a no-brainer to convert this image to black and white, and to enhance the minimalist look a bit to resemble a graphite sketch.

All images are copyright © 2014-2015 Katrina Woollatt. All rights reserved. Images on this blog are not Public Domain unless stated otherwise. 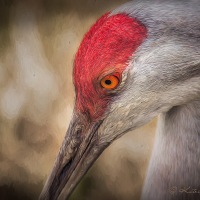 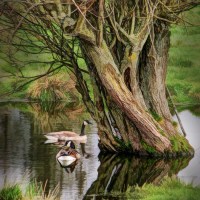 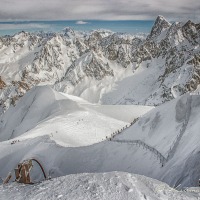 Taking and Editing Photos as I Explore my Florida Surroundings. What Fun!

Taking One Day At A Time

My life through my lens~

Photography and writing by Lianne Ashton ©

Insight, information, and inspiration for the inquisitive nature photographer

A spotlight on nature and the outdoors, blurring the lines between photography and art

Nature Through The Lens

Nature Through My Lens

the runes of the gatekeeper's daughter

telling stories through an alchemist's lens

Journey of a body on this earth

A spotlight on nature and the outdoors, blurring the lines between photography and art

Beyond the Brush Photography

Living creatively through a lens

The Iris and the Lily

Thoughts and images hot off the camera sensor

a journey of discovery with my camera...

Off Center & Not Even

Exploring life one frame at a time!

My journey through photography

An Occasional Diary of Everyday Life and Travel in the U.K. and sometimes elsewhere

Sharing the beauty of of natural world